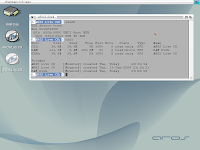 Every modern USB presents itself as a SCSI conforming bulk-only mass storage device to the system. Therefore, in order to do any IO operations, I have had to do them in the old good SCSI style. Therefore, the mass storage class do contain a DirectSCSI method and exposes it to rest of the world.

What a coincidence! I have added a few-lines long implementation of HD_SCSICMD to the .device layer of mass storage. I have started AROS in QEMU and forwarded the USB->PATA converter with a DVD attached to it and AROS CD inside (I didn’t want to test anything special, but it was the first CD I saw on the desktop). AROS booted and stopped. Then, the timeout errors appeared. A lot of them. A bit disappointed I’ve left my desk and did something else. Suddenly, the CD started to spin and AROS booted from USB CD device! Great!

A short investigation showed, that the CD filesystem used in AROS performs the INQUIRY SCSI command with a fixed size, whereas the USB protocol provides a much shorter data in return, which leads to a timeout. Then, it tries to get the full-sized TOC and such. Anyway, AROS team will either need to fix CD filesystem a bit, or I will have to give up 10 second timeouts in mass storage and introduce four pipes there: two of them with very short timeout (100 miliseconds or so) and two with the 10 second timeout.

So, now the mass storage can not only access any USB sticks and USB harddrives, but also USB CD/DVD readers and burners. Nice, isn’t it? 🙂 The next step: booting Efika CD directly 🙂

This website stores some user agent data. These data are used to provide a more personalized experience and to track your whereabouts around our website in compliance with the European General Data Protection Regulation. If you decide to opt-out of any future tracking, a cookie will be set up in your browser to remember this choice for one year. I Agree, Deny
546