… and suddenly everything goes better 🙂

as you may remember, I have released a test pre-alpha iso with AROS for Efika recently. However, there were some issues with using it. Some people tried to boot it from DVD-USB devices, some tried USB Flash Keys. The former succeeded mostly (but not always) whereas the latter failed pathetically. I was scratching my head and found no sane solution. Once, being completely desperate, I have enabled full debug of OHCI driver, in order to see every single transfer description used by all USB devices in the system. There was it! In some cases, OHCI chip was instructed to read 512 bytes starting from physical address 0xffffffff. That cannot be and it couldn’t work. At that point the reason of OHCI hanging was known. But why was it like this???

Well, the answer surprised me a bit. The issue was the sign extension during APTR to uint64_t cast. At some moment, AROS wanted to read from all bootable devices the first sector into it’s local table in .bss section. Since that piece of code belongs to kernel, the virtual address of this portion of memory was somewhere around 0xff7f0000. Sign extended address, 0xffffffffff7f0000 was of course not found in the MMU hash table and the KrnVirtualToPhysical() call failed. Sign expansion fixed, et voilà! All the issues with mass storage are gone.

For those who do not own an Efika, a tiny screenshot: 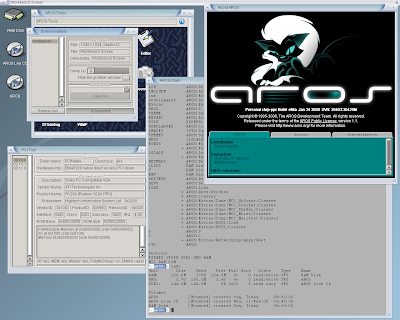 here, you can see the PCI Tool (doesn’t show much because the most of Efika devices are on MPC5200B SoC), the screenshot tool itself, About AROS window with the mysterious “chrp-ppc Build efika”, and shell. I wanted to show you there, where the SYS: assign is pointing to. The volume labeled AROS: is a boot device named UH0. This is the USB flash key. The USB1: device is my DVD drive connected throughout USB bus.

The torrent file is here, if anyone of you is willing to test it. Keep in mind I have toyed with scheduler there. If it does not work smooth for you, let me know. If it works well, let me know too. If the iso fails on your machine, do not hesitate writing me about (in such case try to provide the debug log, if you can).

PS. If the boot starts before the USB key is enumerated, it will not be bootable for AROS. It sucks, but that’s the way AROS boots (some people are considering few changes there). In such case, you may add a command line option, eg. bootdelay=5 will introduce additional delay of 5 seconds right before booting. The iso has a bootdelay of 3 seconds by default, because all my USB devices attached to efika (keyboard, mouse, flash key and DVD) are sitting on a hub.