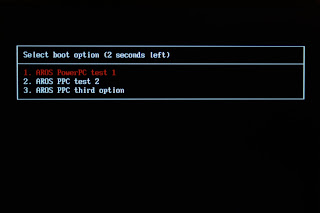 That’s how it looks like. The menu drawing and handling in bootstrap is for real. The menu.lst file is made for testing purposes, just to see whether it will be interpreted properly.

The default boot option is marked red and will be booted in 2 seconds (as seen on the screen) unless some other option gets selected. Of course one may change both the default option and the timeout.

The menu.lst config file which was parsed by bootstrap was like this:

I like embedded systems. They are beautiful and simple, yet powerful enough to surprise you. They surround us 🙂 Beware, they are watching you ;). Recently I have applied for the AROS bounty number 60 – port of AROS to the SAM440. Yes, going back to PowerPC world for some time.

The board is already at home and working. I have made a PPC crosscompiler toolchain on my laptop and have a very nice dev environment. I make the PPC build on x86 machine, boot on sam440 through TFTP protocol and watch the debug output sent over serial line on x86 again. Recently, I have even added the rs232 terminal support to my beloved Eclipse IDE, and I don’t need to switch between Eclipse and xterm anymore 🙂

The porting process may be divided into few logical parts:

The U-Boot installed on sam440 provides a boota command which was initially supposed to boot AmigaOS4 operating system. This command looks for possible boot sources and launches the proprietary second level bootloader used in OS4. On my setup it loads the open-sourced second level bootloader which is responsible for loading AROS kernel and additional modules in the same fashion x86_64 does. This step should be halfway ready (initially with boot through TFTP only) within next week. Later, the read-only support for several filesystems (FFS, SFS, ISO9660 come to my mind) will be added. You may expect some nice screenshot of this bootloader this week :).

In the mean time I will still hunt for bugs in x86_64 AROS. They are really nerving but hopefully solvable. Recently, it became possible to start the InstallAROS tool on 64-bit machine, format AFFS partitions and install 64-bit AROS onto the drive. AROS can even boot from harddrive after successful installation process. Amazing 🙂